A sudden cold touch on my skin. Then a second. Now a small drop on my laptop screen. I turn around to see a large white and towering cloud approaching over the bow of the ship. Another rain shower is on its way towards us, and I quickly try to assess: is this only going to be some light drizzle that I can weather out on deck, or should I seek shelter?

A sudden large raindrop on my thigh resolves this question. I hastily gather my laptop, mobile, bottle of water, and face mask and head below deck, just in time before the downpour begins for real.

Having now run below decks for the fifth time today, I decide to stay here for a while and start to reflect. Seen from a slight distance, the clouds that form rain showers are quite beautiful. The life of such a cloud begins as small, benign fair-weather cloud. If the atmosphere is unstable, and if there is enough moisture in the air, they, however, rapidly pass the fair-weather stage and rise in cauliflower-shaped towers several kilometers tall. At this stage the rain will start; the taller the tower the more intense the rain will typically be.

Although these clouds can be impressively large, they still are suspended in the otherwise transparent air and thus might seem weightless. But that cannot be true; after all clouds are made up of either water droplets or ice crystals, and both liquid water and ice are certainly not weightless. Maybe there is just very little liquid or ice in the clouds? Now I am getting really intrigued.

How much water is suspended in such a freshwater cauliflower?

I remember a photo I had recently taken and start to crunch some numbers. The photo shows a mature cumulus cloud that has started to rain, neither particularly large nor particularly small. In order to estimate the weight of this cloud, I simplify a little and assume the cloud is cylindrical in shape. A cylinder of about 6 km in height and 3 km in diameter.

With these dimensions and typical concentrations of liquid water, I arrive at an estimate:

the single cloud in the photo contains about 100 000 tons of liquid water.

How can such an enormous weight be supported by something as feeble as air? This is only possible because each individual cloud droplet is quite small. The smaller the droplet, the more it just moves along with the surrounding air.

Thus only once the cloud droplets start to collide and merge, they become large enough to finally leave the cloud and return to the surface as rain.

But even knowing this, the amount of water suspended in a cloud remains stunning. I think I will be somewhat more careful with my gear when I see the next cloud approaching over the bow if the ship. 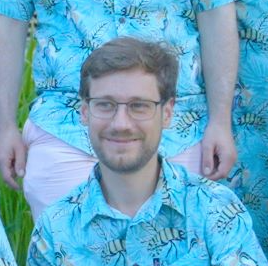 I am a researcher in meteorology at the Bjerknes Centre for Climate Research and the University of Bergen. In my research, I investigate how short-term weather events such as cyclones shape the mean climate and its seasonal variations. At the moment I am looking mostly at jet streams, linking the variable, meandering jet associated with mid-latitude weather to the much more steady jets seen in the time-mean circulation.