For long time freshwater has been seen as one potential cause for rapid climate change in the North Atlantic – Arctic region – probably most people have heard about the ‘Gulf Stream is slowing down’ scenarios with freshwater leading to sluggish currents and less heat being transported to northern high latitudes. In our two recent studies we were able to show that while such a scenario is plausible in the North Atlantic, the ocean response in the Arctic is quite the opposite. 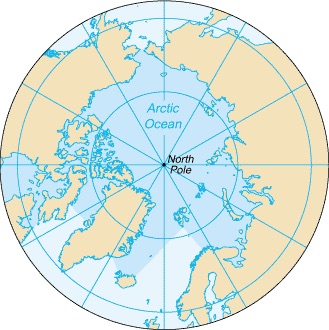 The scientific narrative of larger freshwater input and weaker ocean circulation is based on the extensive literature on the effects of freshwater on the ocean circulation in the North Atlantic. However, the response in the Arctic has received much less attention and this is what we were after. For simplicity we focused on changes in the river runoff, which is projected to increase as much as 30% by the end of the 21st century.

In our first study (Nummelin et al., 2015a) we used a simple column model and represented the whole Arctic as one vertical profile. In this model we increased the river runoff and found that the heat flux from ocean to the sea ice stays close to constant even though the surface layer freshens, reducing vertical mixing towards the surface from warm Atlantic origin waters at depth. This somewhat counterintuitive result follows from the reduced surface heat flux outside the ice covered areas, which leads to warmer Atlantic Water layer and a modest change in vertical heat flux inside the Arctic.

In our second study (Nummelin et al., 2015b), instead of working with the idealized column model, we wanted to try out something a bit more realistic and we turned into the Norwegian Earth System Model (NorESM1-M). We chose to force the model with a constant atmospheric state and allowed the ocean and sea ice cover to adjust to increasing Arctic runoff. This more complex model confirmed our previous result and showed that the increase in the runoff leads to warmer Arctic Ocean with very little change in the vertical ocean heat flux under the ice cover. As a result the ocean circulation turned out to be more important for the increase in the sea ice thickness than the changing vertical ocean stratification.

These two studies lead us to conclude (summarized in Figure 1) that while the North Atlantic ocean responds to increasing freshwater input with a slowdown of circulation, reduced heat transport, and a cooling of the ocean, the reduced surface fluxes (i.e. less cooling) further north accommodate the reduction in the ocean heat transport. By the time the Atlantic inflow enters the Arctic the stronger stratification and reduced mixing have lead to slight expansion of the ice cover and much warmer Atlantic water at depth. In fact the ice cover adjust preferably by increase in the ice extent, not by increase in the thickness because the vertical heat flux in the already ice covered areas stays constant due to the warmer ocean at depth.

In our upcoming study we finally apply all the information we have gained from the two previous studies to understand the changes in the Arctic Ocean in the fully coupled atmosphere-ocean simulations during the ongoing century. From the preliminary results it seems that the two most important findings are similar to the idealized studies: first, changes in the North Atlantic have relatively little to do with the changes in the Nordic Seas and the Arctic, and second, ice extent responds to changes in ocean heat transport.

Aleksi Nummelin, PhD Candidate in climate dynamics at the Geophysical Institute, UiB and the Bjerknes Centre for Climate Research