11. February is the UN International Day of Women and Girls in Science

There are many benefits of gender diversity in the workplace. Yet we are still far from this goal, Erica Madonna, researcher at the GFI, UiB and the Bjerknes Centre for Climate Research points at.

“What can we do to improve that?”, she asks.

To discuss this, she has set up a lunch seminar with Dr. Audine Laurian, scientific manager at the German Collaborative Research Center Waves to Weather.

Laurien and colleagues started a project to promote gender balance providing role models to the students and scientific community.

Erica Madonna is co-leading the research focus “physical drivers” in the Nansen Legacy project, looking into interactions between atmosphere and ocean in the Nordic and Barents Sea.

In her research, Erica Madonna is analyzing model and observational data to understand changes in the climate in the Arctic, such as the occurrence of   cyclones in the Barents Sea. In November last year, together with colleagues she published a new study indicating that the retreat of sea ice in the Barents Sea has little impact on the number of cyclones reaching the Arctic, as previously thought.

Read the story here: What controls cyclone variability in the Barents Sea

"Be patient and produce good science”

During the time as a master- and PhD student, Erica Madonna has experienced from time to time the feeling of being overlooked.

“It could be like when you go with other students to a poster session, when asking more senior scientists about the work presented in their posters, they would answer only talking to my male colleagues”, she says.

For her, the solution was to be patient and produce good science. She liked the atmosphere at small conferences and workshops that offered enough time for discussions and interactions among scientists.

One of the problems of gender imbalance is the fact that it takes a long time for a shift among the top positions.

Statistics for gender balance among researchers in Norwegian academia show that women were in the majority among the PhD students both in 2009 and 2019. The figure a) is for universities and colleges, and the b) for research institutes. 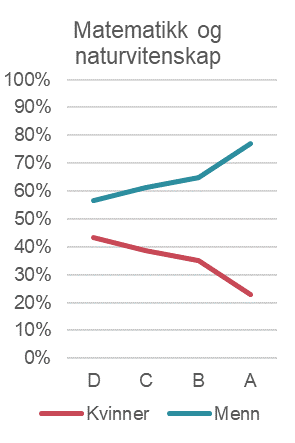 During the 10 years between 2009 and 2019 there is a steady increase among females in the top positions, especially for the university and college sector. That is when we look at all of academia, but there is a difference when it comes to subject levels.

For Mathematics and the Natural Sciences, the statistics for 2019 still show a large gap between men and women in the top positions. (see Figure to the left)

A tip for senior scientists

Erica Madonna points at studies that show the many benefits of gender diversity in the workplace, where mixed groups often are more productive, creative, and innovative.

She invites both men and female scientists to the lunch seminar on gender balance to discuss this problem, as multiple perspectives are needed to address this issue.

Her advice for senior scientists on creating a more inclusive work environment is to try to actively reach out to young scientists, both male and female, for example by discussing their results during a poster session at a conference.